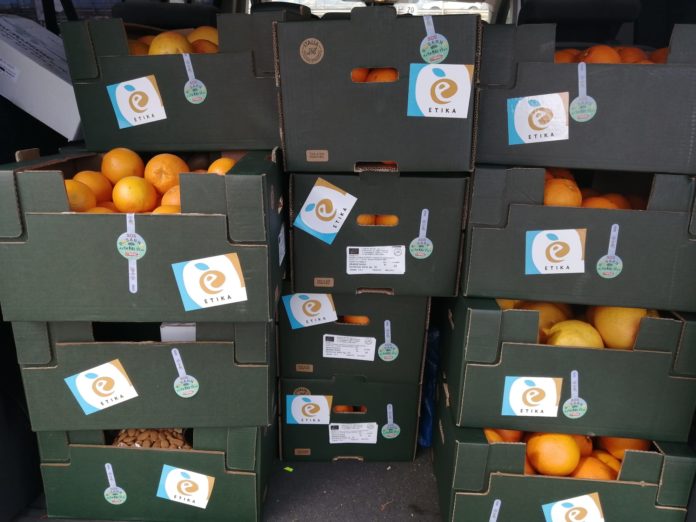 Rome (NEV), 7th February 2022 – 100 tons of oranges, 100 days of work.  That is the sum total of the products sold this year thanks to the Etika supply chain promoted by FCEI, through its migrant and refugee programme, Mediterranean Hope, with SOS Rosarno. Oranges, mandarins and conserves bought in Italy and abroad, in particular by Protestant communities and churches.  Among these, the Church of Scotland and the German churches, more particularly, those in Westfalia.

A significant result, which has really helped many agricultural businesses in the Plain of Gioia Tauro.  “Between those directly and indirectly employed – obviously all properly paid and with contracts – we are speaking about more than 50 people, Calabrese, African, Ukrainian, so many nationalities,” explains Giuseppe Pugliese from SOS Rosarno.  “Thanks to our ethical supply chain, these purchases have actually saved some businesses from closing.  The traditional market is in a state of crisis, farmers are facing a difficult season and we have therefore been a “lifeboat” for them”.

The agricultural businesses which work with SOS Rosarno and produce Etika oranges are, in fact, working in part for the project implemented by the Protestant churches and in part for the “traditional market”.

In this area, the health emergency has unfortunately also had dramatic repercussions from an economic point of view in terms of sales but it has at the same time spurred solidarity networks to help those who have been or at risk of being crushed by the pandemic.  Solidarity has grown in networks of critical and aware consumption, not within the free market,” concludes Pugliese.

Through the Etika brand, by agreement with the cooperative partners, Mediterranean Hope has from this year offered those buying oranges a price which includes the addition of a “social quota” of 10%. The acquisition of “solidarity products” therefore helps to sustain social projects being implemented in Calabria.  Among these, in the next few months, will be the opening of the “social hostel” for casual workers (about which we will soon bring you further news, ed.).

“The aim of our initiatives, which are all implemented and conceived at grass roots level”, explains Francesco Piobbichi, MH staff member in Rosarno, “is to create an ethical supply chain which is also an exemplar of circular economy in a place as fragile and complex as the Plain of Gioia Tauro, capable of safeguarding both the environment and development of the region with rights for all workers, migrant or otherwise”.