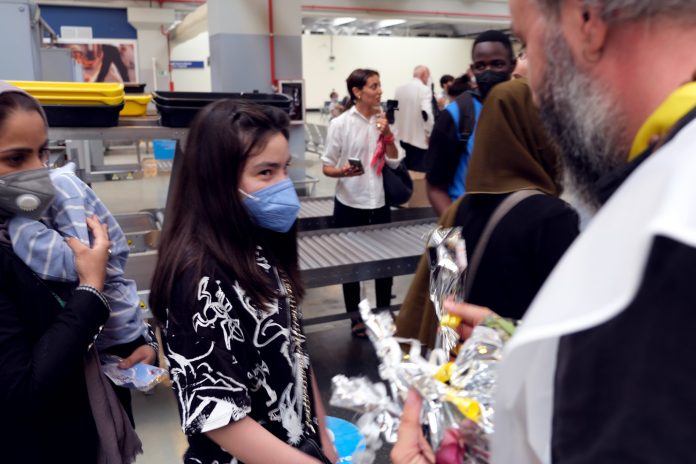 Rome (NEV), 27th July 2022 – 217 refugees sheltering in Pakistan since last August arrived today, 27th July, on a flight from Islamabad.  Their entry to Italy was made possible thanks to a memorandum of undertstanding with the Italian State signed on 4th November 2021 by the Federation of Protestant Churches in Italy, Waldensian Board, Caritas Italian, Community of Sant’Egidio, ARCI, IOM, INMP and UNHCR.

Together with others arriving from Iran – on 25th July and on28th July – more than 300 Afghan refugees will be hosted in our country thanks to Humanitarian Corridors, a project financed entirely by the organisations involved and made possible thanks to the generosity, unpaid commitment and volunteering of many Italian citizens who have offered their houses for hosting, as well as religious congregations, NGOs and various civil society actors.  Amongst these, Solidaire which, in collaboration with Open Arms, contributed to organising the flight from Pakistan.

Click here for footage and photos of the event.

Click here for the video of the press conference:

“As the Italian government, we made a commitment not to abandon the Afghan people,” confirmed Marina Sereni, vice-minister of Foreign Affairs and International Cooperation.  “The humanitarian situation is very serious, particularly for women and girls, who have not been permitted to return to school.  We cannot accept that Afghan children should lose their future.  The Italian Government, along with its own partners and international agencies, will continue to send humanitarian aid to Afghanistan and to neighbouring countries.  We have a duty to welcome those who come to Italy thanks to Humanitarian Corridors, which are the fruit of efforts by Italian civil society, which got things started, and thanks to collaboration with the Ministries of the Interior and of Foreign Affairs, which enabled this first group to arrive”.

Daniele Garrone, president of the Federation of Protestant Churches in Italy and Alessandra Trotta, moderator of the Waldensian Board, stated: “Protestants are also welcoming with joy the beneficiaries of this humanitarian corridor.  We have never forgotten them.  Their arrival today is the fruit of a joint commitment by organisations and institutions who have worked together to develop and expand the good practice of humanitarian corridors which was inaugurated in 2016 and has, since that time, been proposed to European institutions as a structural policy for managing migration. The ecumenical dimension, which sees Protestants and Catholics working together, is particularly significant for us.  Today we are welcoming Afghan refugees just as we have welcomed those from Syria and Libya in the past.  In recent times we have also been engaged in initiatives to support those who have fled Ukraine, convinced that no difference should be made between Europeans and non-Europeans, and that all refugees who flee war and persecution deserve a safe destination, without any distinction as to their origin or religious identity.  Indeed, we hope that the welcome shown towards the population fleeing Ukraine signifies a political and cultural step-change towards refugees of all other nationalities and of every origin.  We further hope that we can open a corridor from Bosnia in support of refugees literally trapped along the Balkan route.  Also operating on Lampedusa and in direct contact with the tragic effects of irregular migration, we would underline the urgent need for a European plan to open safe and legal routes both for migrants and for asylum seekers, in order that whoever is fleeing or migrating no longer has to risk their life.  We thank the churches of the Federation, sister churches abroad, the bodies and organisations contributing to this outcome, such as those who choose to allocate their Otto per Mille contribution to the Union of Waldensian and Methodist Churches: their gesture is also an essential contribution to the realization of this hosting project.  In our small way, we are ready to do our part”.

“We have never forgotten the suffering of the Afghans!  Today a promise has been kept for 300 Afghan refugees:  not to abandon them after the Taliban’s return to power last August,” statedMarco Impagliazzo, president of the Community of Sant’Egidio. “We are happy to welcome them and to activate the tested path towards integration through Humanitarian Corridors for all of them.  These people will be hosted in various cities by our Community and also by citizens and religious congregations who have wanted to open the doors of their homes.  Whilst millions of people who flee war, hunger and climate change in order to seek a future risk disappearing from the spotlight or being the subject of political instrumentalization, Italy shows a humane and welcoming face thanks to the Humanitarian Corridors and a virtuous synergy between civil society and institutions.”.

Filippo Miraglia, national immigration coordinator for ARCI stated:
“ARCI is extremely satisfied to participate for the first time in Humanitarian Corridors: if these people arriving today by ‘plane, generously welcomed by us and by Italy, had set off on their own to seek protection and had arrived at EU borders, resorting to using traffickers as 99% of those fleeing are obliged to do, we would contemptuously call them “clandestine” and they would risk ending up the Libyan detention camps supported by us, or pushed back to our land borders, as happens every day, violating every law and international convention.   For this reason we want to support and invest in every form of safe and legal pathway such as Humanitarian Corridors, also to show that alternatives exist.  We thank the national network of ARCI Refugee Associations, offering practical reception and support to the beneficiaries of this Humanitarian Corridor, and the Italian Buddhist Institute Soka Gakkai which decided to prioritise 8 x 1000 funds for reception and inclusion initiatives for people fleeing the Afghan regime.

For Enrique Piñeyro, from NGO Solidaire: “This journey is worth a great deal to us because we are accompanying people who want to flee the place they live because they are in danger there.  Between forced marriage, the impossibility of studying or of leaving the house alone, Afghan women…are living in inhumane conditions.  To be able to help in order that they may live a normal life is extremely rewarding.”

Oscar Camps, founder of Open Arms, declared: “I could never have imagined, certainly not in 2015 when we began rescuing people who were fleeing the war in Syria by crossing the Aegean Sea, that today I would have found myself at Islamabad airport collaborating to bring about a Humanitarian Corridor which will bring Afghan women and girls to safety, in this case to Italy.  This has been made possible thanks to collaboration with many organisations and thanks to the aeroplane made available by the NGO Solidaire.  For us, used to rescuing at sea in difficult conditions, it is a matter of pride to be able to evacutate these people through safe and legal channels.  We will continue to be present at sea, but it is also important to try to avoid unnecessary suffering, by facilitating these Humanitarian Corridors in every way possible.  Open Arms and Solidaire will continue to do whenever possible.”