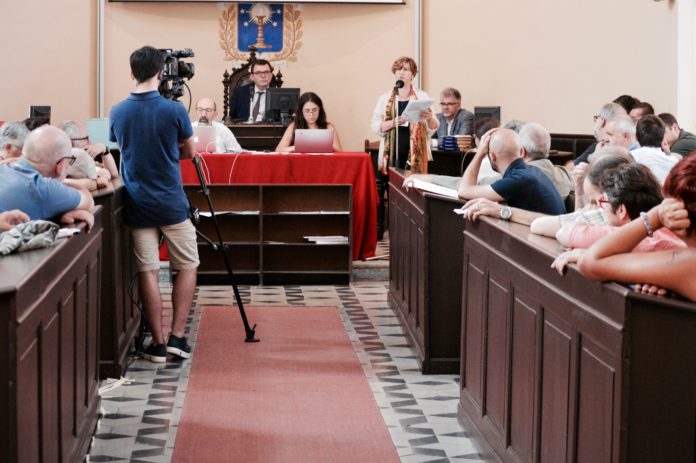 Rome NEV, September 7, 2019 – The first public speech by Alessandra Trotta as the new moderator of the Waldensian Board ranges over the major social and theological themes: social commitment, ecumenism, protection of human rights, democracy and justice

Three the key words in her speech: “we”, “overturning” and “unity”. “A universal ‘we’, not opposed to a ‘you’ that identifies the enemies to defend against, not sectarian, elitist or excluding” says Trotta, indicating faith as a way to overcome the opposition between individual and social rights, between personal well-being and common good. The word “overturn”, the center of Christian ethics, is the reversal of the status, as the motto chosen by the Synodal Commission for Diaconate (CSD) for its awareness campaign says: “First the last”. Third word, “unity”, understood as compactness, based not on the authority of a single member, but on an egalitarian participation without hierarchies. “The Church is called to overcome the drive for fragmentation, division, exclusion – the moderator affirms -. To walk together we need a collaboration based on mutual trust,  instead of everyone going by  him or her self ”. The unity of which we speak is not uniformity, but plurality and recognition of one another.

Alessandra Trotta’s speech ended with a commitment to humility and trust. “Humility that opens up to attentive and sincere listening, inside and outside the churches, a listening to everybody, beginning with those who are not there as we would like them to be there; to those angry, to the disappointed, to the fearful, to the apathetic, a listening interested in understanding the languages, ready to be questioned by the needs, accepting the risk of a true dialogue “.

“Trust understood as trust in God, foundation of our hope; but also among us”,declares Trotta. “This trust is built with complete and transparent information, a fluid communication, in a constructive and even critical dialogue; with a loyal collaboration, with a positive prejudice on the commitment of the other, on his or her sincere search to do what is best, and to do it starting from the authentic confrontation with the word of God”.

The Synod of the Methodist and Waldensian churches  elected its administrative bodies, as it does every year. In addition to the new moderator Alessandra Trotta, following are the names of the elected as members of the Waldensian Board:

The Synod reconfirmed pastor Mirella Manocchio as President of the Work of the Methodist Evangelical Churches of Italy (OPCEMI) and Professor Fulvio Ferrario as Dean of the Waldensian Faculty of Theology.