Rome (NEV), November 7, 2020 – The Action by Christians for the abolition of torture (ACAT Italy) for this month relaunches an urgent action that concerns, in the first instance, the case of Patrick Zaki. “According to the alarm cry raised in recent days by Amnesty International – writes ACAT -, Zaki could even risk life imprisonment, given the charges against him. A signature costs nothing and can sometimes make a difference”.
Patrik George Zaki has been in pre-trial detention for his activities in the field of Human Rights since February 7, 2020. From renewal to renewal this detention was periodically extended, until the date of last October 7, when the detention was prolongued by another 45 days. Researcher at the “Alma Mater” University of Bologna, while on his way to visit his family residing in Mansoura, Zaki was arrested on February 7 at the Cairo airport on a mandate from the Prosecutor’s Office and then tortured. He underwent a 17 hours interrogation, blindfolded and handcuffed all the time, with threats, blows to the stomach and back, tortured with electric shocks. The case is very similar to that of Giulio Regeni.
Patrick Zaki is a scholar and human rights activist and, on behalf of the NGO Egyptian initiative for personal rights (Eipr), he deals with the rights of the Christian minority, the LGBTQI community, women and freedom of expression. Patrick is accused of inciting to subvert the political system to change constitutional principles, of spreading false news intended to undermine the social order to weaken the prestige of the state and of disturbing public order via Facebook and risks up to 25 years in prison.
Faced with these data, Italy and the international community can no longer continue to pretend that all this is normal, turning away or continuing to do business with Egypt (it is news of a few days ago that Italy has sold two Italian frigates to the Egyptians). We must keep our attention on this boy to show him all our solidarity.

How to help Patrick Zaki:
Send (by letter or email) the attached texts (to Geneva and Rome)
Download the letters

Sign at least one of the outstanding petitions
petition on change.org
petition of Amnesty International

Let’s not forget, however, that according to a report published by Amnesty International and Hochschule fur Wirtschaft und Recht, 16 thousand people were arrested for political reasons by the Al Sisi regime, subjected to isolation and inhuman and degrading treatment. Among these we point out the case of Hoda Adbelmoniem, 61-year-old human rights lawyer, detained since 1 November 2018 in the women’s prison of al-Qanater on charges of terrorism, without the assistance of lawyers and with very rare meetings with the her family: last time her relatives saw her briefly at a hearing on July 18, 2020. 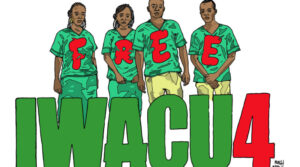 In Burundi 65 organizations ask for the immediate release of IWACU journalists Agnès Ndirubusa, Christine Kamikazi, Egide Harerimana e Térence Mpozenzi, in the first anniversary of their imprisonment. On 22 October 2019, the four journalists were arrested along with their driver Adolphe Masabarakiza on their way to investigate alleged clashes between the security forces and an armed group in the province of Bubanza. Although they informed the provincial authorities of their plan to travel to the area, they were arrested on arrival and later accused of threatening the internal security of the state.

ACAT  is an ecumenical Christian association that acts against torture and the death penalty, working alongside all those who have the same goals and promote human rights. Formally founded in the spring of 1987 thanks to the contribution of the Waldensian church of Rome and the “Christian Renaissance” movement, the Italian branch of the Action of Christians for the abolition of torture is due to the inspiration of the Waldensian pastor Tullio Vinay, one of the first in Europe to denounce the violence suffered by political prisoners in Vietnam. Since the beginning,  ACAT chose to operate on an ecumenical basis, bringing together Protestants, Catholics, Orthodox and other Christian confessions willing to pray and act together. Among the last battles in the history of the association, the one against the death penalty stands out. Since 2008,  ACAT has established a thesis degree award on the subject of torture and the death penalty with the support, among others , of the Income Tax 8 × 1000 of the Methodist and Waldensian churches.