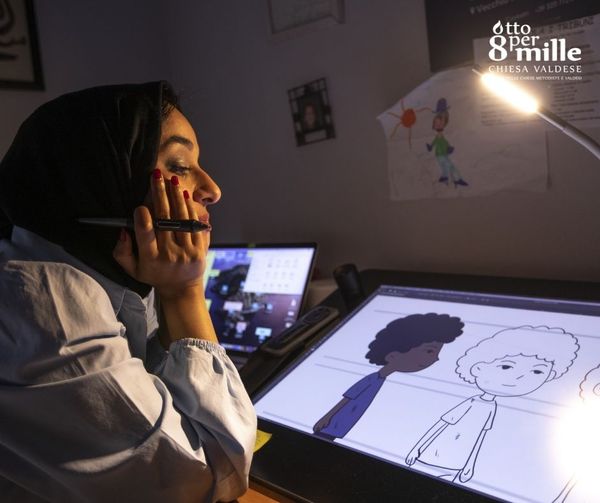 Rome (NEV), April 17, 2021 – This year’s Eight per Thousand campaign of the Waldensian Church – Union of Methodist and Waldensian Churches – will be an all-female animation video. The campaign’s art director is cartoonist and graphic journalist Takoua Ben Mohamed, who developed a storyboard with “leading women”, starting from an idea of Sergio Velluto’s Web & com agency. An animated video lasting about one minute will therefore be the tool for the communication campaign of the Eight per thousand 2021, of which we are able to anticipate some contents and which will be launched in the coming weeks. Objective: to explain how the Eight per thousand (OPM) funds of the Waldensian Church, Union of Methodist and Waldensian churches, are used and why it is increasingly important to choose who is to use them, when completing the tax return declaration.
“It is a project – explains the author – about social issues, citizenship and new generations. A choral story, set during the lockdown, which sees women as protagonists of hope and change”. And change is precisely the keyword of the OPM 2021 campaign . “We felt the need to change – explains Manuela Vinay, head of the OPM of the Waldensian Church – Union of Methodist and Waldensian Churches -. Perhaps the pandemic has prompted us to question ourselves more about what we can/must do, and ‘change’ was just the first key word occurred to our minds. Hence also the choice of the cartoon, which we immediately liked also because we linked it to Takoua’s work, which we really appreciate. The other term that guided us was ‘responsibility’, we can make a greater contribution to improving the world we live in only with a strong sense of shared responsibility. And sharing is the other key to understanding: we are not alone, our strength comes not only from faith, but also from the people who trust us. Everyone has to do their part: those who sign for 8 × 1000, those who assign the funds, those who spend them. Together we can continue to do more and better. I hope that the pandemic can “awaken” a feeling of active citizenship in many directions, including the desire to express a choice, not only a signature for 8 × 1000″.

Takoua Ben Mohamed is a cartoonist and graphic journalist born in Douz, Tunisia, and grown up in Rome. She is the author of the works “Woman Story” (2015), “Under the Veil” (2016), “The Jasmine Revolution” (2018), “Another Way to Cambodia” (2020), the latter three released for BeccoGiallo publishing house. In 2019 she produced the docufilm Hejab Style for Al-Jazeera Documentary Channel, broadcast in 2020. For more than two years she has been collaborating with the magazine and study center Confronti. Next professional commitments of the author, in mid-May, a new book entitled “My best fascist friend “and a European campaign against Islamophobia, with a particular focus on Muslim women”.