The General Assembly of the Christian Church (Disciples of Christ) was held in Indianapolis (Indiana, USA), July 8-12. The week before (June 30 – July 4) took place the General Synod of the United Church of Christ (UCC) in Baltimore (Maryland, USA). These two denominations are autonomous, but they share the same coordination (the Global Ministries) which maintains relations with international partners, including the Union of Methodist and Waldensian Churches in Italy, and the many missions around the world. 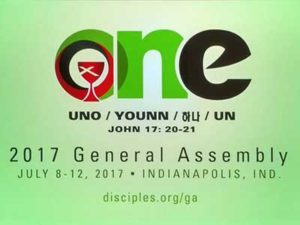 The Church of the Disciples of Christ comprises several communities which are sometimes even very different from each other. There are African American and Korean churches and other ones that are predominantly white churches. Some of them are more progressive, some other more conservative. But the theme of the Assembly, which was entitled One was just about the concept of unity, the fact of being able to stand together despite the differences and the effort entailed by this commitment. The perception that I had was the one of a single church with different groups inside it but trying to move in a direction of openness. Such commitment could be noted in the strong words that Rev. Josè Francisco Morales Jr. and Rev. Dr. Serene Jones used in their sermons. Both aiming at the weakest and the marginalized groups, but also aiming at the challenges of unity. An openness signal was also demonstrated when the General Board elected – with broad consensus, as General Minister and President the first African American woman to hold that position: Rev. Teresa Hord Owens. As soon as she was elected, visibly moved, Hord Owens thanked everyone for the trust shown and reminded everyone that “we will go together along this pattern of unity”. It was a very intense moment when she took up office during the final cult with all the participants surrounding her in a circle, hand in hand.

It is important to emphasise how the UCC and the Disciples of Christ are very committed to social justice, as it is called in the United States. This effort makes these communities the most forward-thinking in the USA. The presence of a representative from Waldensian and Methodist churches was closely linked to the core theme that was discussed during these two meeting: the issue of immigration. In such frame of references, I had the opportunity to present the work of the Mediterranean Hope-Refugee and Migrant Project of the Federation of Protestant Churches in Italy (FCEI), and the “Humanitarian Corridors” project. To date, the issue of immigration is one of the most crucial in the United States, especially because of the hardening of the migratory policies during Trump’s presidency. In recent months, border militarisation, border control detention centres and deportations have increased, not to mention the blockade of visas for people from Muslim-majority countries.

During the Assembly, this issue was also debated and two motions were approved. The first claimed the Disciples of Christ an Immigrant Welcoming Church (as it happened during the UCC Synod), that means a church that supports immigrant families and individuals in their incorporation into society and provides them with material and spiritual assistance as well as political and legal support. In addition, the above-mentioned church should promote a culture of solidarity and respect for the dignity of all human beings. The second motion, the Emergency Resolution, expressed concern over the hardening of migration policies, including the choice to reduce the numbers for migrants fleeing from danger situations and the ban on travel for those who cannot prove to have close relatives in the US. It is remarkable that inside this motion have been mentioned the international partners and the open letter to the churches that FCEI has recently published about the support of NGOs in the Mediterranean. Thus, it is very strong the bond that now unites all those churches that are expressing in favour of the refugees and the migrants in the world. As said Peter Makari, coordinator of the Global Ministries for Europe and the Middle East: «Our churches are certainly not a human rights agency or an NGO, but they are communities of faith that are not separate from the society to which they belong to. Today, we do not know precisely what challenges we are about to face, but we know that there will be challenges and we will try to face them together, pursuing the unity of the church and the world.»

And the motto of this denomination appears even clearer: “We are the Disciples of Christ, a movement of unity in a fragmented world We are part of the one body of Christ and we all welcome to his table as He welcomed us”.

The effort of the Disciples of Christ is therefore to remain united, remembering that «We are one in the Spirit, we are one in the Lord», a hope we share as churches, especially in an age in which we need to be together to face the great challenges and injustices that we see and live in our everyday life.