Rome (NEV), October 26, 2017 – On October 20th in Aprilia (near Rome) Susanna Camusso, general secretary of the CGIL (left wing trade union), and Ivana Galli, general secretary of FLAI/CGIL (agro-industrial branch), visited a reception facility hosting Syrian refugees arrived in Italy through the “humanitarian corridors” project. Here, they met the family (mother, father and three children) “adopted” by FLAI/CGIL. This was made possible by a Protocol called “Adopting the future”, signed in April with the Federation of Protestant Churches (FCEI).

A meeting of mutual knowledge, an occasion to get acquainted in depth with the project realized by Mediterranean Hope (MH) – Refugees and Migrants Program of FCEI, run together with the Waldensian Board and the Community of St. Egidio.

For Camusso “the ‘humanitarian corridors’ must be supported and we will do so by asking the Italian government to extend the project, without giving up the idea that the response should be at the United Nation level. When we saw the barbed wire back at the European borders, we understood that fear was so great, to be able to change Europe and its policies. As per the migrants issue, we have chosen the concrete approach with the adoption of this experience. 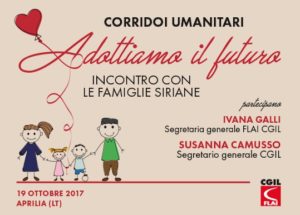 No one should be condemned for not being able to go back home. Meanwhile people cannot live a ‘suspended’ life, this is why we have asked the European unions to fight together for integration through work, in all European countries”.