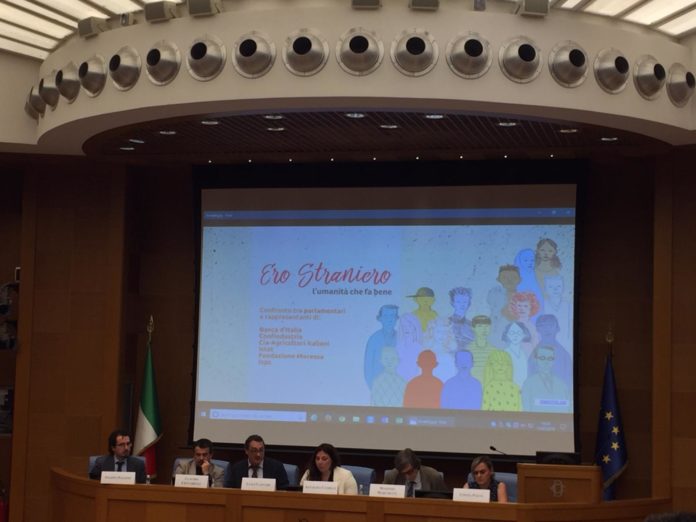 Rome (NEV), July 20,  2019 – There are two work worlds in Italy. One is that of the “autochthonous”, the other is that of migrants: paid on average 2-3 Euros less per hour, with fewer forms of social protection, less stable in contractual forms.
Social and work inclusion of foreign citizens was discussed on July 11, at a conference promoted at the Chamber of Deputies by the campaign “I was a foreign”, to which also the Federation of Protestant Churches in Italy (FCEI) participates, together with organizations and associations that for various reasons are involved in human rights issues. Title of the conference “New tools for job promotion and the inclusion of the foreign population in Italy “. Many and qualified were the people who intervened in the debate, among whom we recall the journalist Annalisa Camilli of the magazine Internazionale; Luigi Cannari of the Bank of Italy; Claudio Ceccarelli of the National Institute of Statistics; Filippo Pagano of the National Institute for Social Security; Massimo Marchetti of the General Confederation of the Italian Industry; Cinzia Pagni of the Confederation of  Italian Farmers; Chiara Tronchin, a researcher of the Fondazione Moressa.

After the conference, a round table followed among the members of the Chamber of Deputies Constitutional Affairs Commission and the representatives of the associations who support the  bill – presented in October 2017 – and arrived in recent weeks at the Parliament for discussion. Among the participants to the round table we recall: Laura Boldrini, former speaker of the Chamber of Deputies; the journalist Francesca Scianchi of La Stampa; Riccardo Maggi of the Più Europa Party; Gennaro Migliore of the Democratic Party; Simona Suriano of the Movimento 5 Stelle; Laura Ravetto of the conservative party Forza Italia; Emanuele Prisco of the right party Fratelli d’Italia and Igor Giancarlo Iezzi of the Lega Party.

The law proposal of popular initiative on the themes of work asks, in summary, entry channels for work and the possibility of regularizing the foreigners already present in the Italian territory. In Italy there are currently no regular entry channels for non-EU foreigners in search for a job. There are, on the other hand, over half a million foreign people on the Italian territory in conditions of irregularity, without any possibility, therefore, of being regularized in order to access essential social services. The proposed law of popular initiative provides, among other things, the introduction of the sponsor’s system (direct call system) also on individual basis for “the inclusion in the labor market of the foreign citizen and the availability of an accommodation for the period of stay in the national territory ”; and the regularization on individual basis of foreigners who find themselves in an irregular residence situation, “when the existence in Italy of a work activity or proven family ties be demonstrable”.