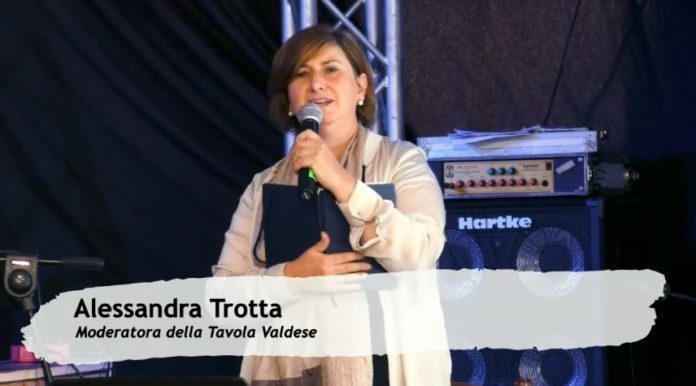 Torre Pellice (Turin) (SSSMV / 10),  September 6, 2020 – The events of the week “Generations and Regenerations” ended with the presentation of the Eight per thousand projects of the Waldensian and Methodist churches for the COVID-19 emergency. “Taking care of people, memories and territories”, this was the initiative subheading. A rich review that took place in the Waldensian valleys, in the province of Turin, in the days usually dedicated to the Synod of the Methodist and Waldensian churches, postponed this year due to the CORONAVIRUS.
The moderator of the Waldensian Board, deacon Alessandra Trotta,  in her closing greetings,  thanked all the people who participated and collaborated in the week.
“It has been an intense time and I hope that we have all drawn encouragement from it to continue engaging in ‘good fights’ – said Alessandra Trotta in her speech, in which she emphasized the interconnectedness of all human beings -. One of the most relevant issues today is accounting for the money that citizens entrust to us through the Eight per thousand mechanism. This year we were unable to do so directly during the Synod, which was postponed to next year. But this on-line Synod and in particular today’s meeting – explained the moderator –  is a way to “report to churches and citizens what we are doing. We can officially say that we examined all the requests and regularly allocated the funds, the distribution of which will be, as always, made public through our website, around mid-September”.
In 2020, the resources amounted to almost 43 million euros “for which we thank signatories again”, said Trotta. This amount represents the 3.2% of the choices of the Italians. The requests received for projects submitted through the on-line platform were 4671, 500 more than the previous year, although the number of applications that could be presented by each promoter was set at a maximum of 2 projects. 3,000 of these requests passed the formal preliminary phase and 1243 projects were financed, of which 452 abroad and 791 in Italy, in all areas of intervention. The largest number of projects supported concerns the improvement of the living conditions of people with physical and mental disabilities, followed by projects for children and young people, cultural and health projects and lastly, in percentage terms, those relating to the reception and inclusion of refugees and migrants.
“In such a particular year – concluded the moderator – we intentionally decided to keep the attention to normality high, maintaining the variety of projects’ destinations, to promote development in the direction of greater social justice, the protection of the rights of the most vulnerable ones, environmental sustainability and democratic participation”.
During the week, numerous guests, experts and witnesses spoke on the issues of local administration, social justice, women’s rights, agricultural workers’ rights and then again on preaching, pastoral and service ministries,  the right to housing,  children,  information at the time of the COVID-19 and on how the pandemic is influencing the lives of individuals and communities. To deepen the contents and review the interventions proposed by the Methodist and Waldensian churches, the recordings and reports of all the days are available on YOUTUBE  or on Radio Beckwith. A picture emerges in which it is essential to collaborate with institutions, churches and communities for health, justice and sustainability on the basis of interconnection and cooperation. This is the agenda for the months to come.
Among the protagonists of these days, we recall the president of the European Parliament David Sassoli, the vice president of the Emilia Romagna Region Elly Schlein, the mayors of the Valleys, the sociologist Maurizio Ambrosini, the journalist Sara Manisera, the social and trade union activist Aboubakar Soumahoro, Dora Bognandi for the Federation of Evangelical Women in Italy (FDEI) and Gabriella Rustici, president of the Waldensian and Methodist Federation of Evangelical Women (FFEVM), Donatella Barus, for the Umberto Veronesi Foundation, Sabrina Giannini, investigative journalist of the TV National Channel RAI3, the  General Manager of the local health unit ‘Asl To3’ Flavio Boraso.

There was no shortage of artistic moments, including the show of the singer and actress Cristiana Voglino and the concert by Fabiola Tedesco with the music of Johann Sebastian Bach for solo violin.