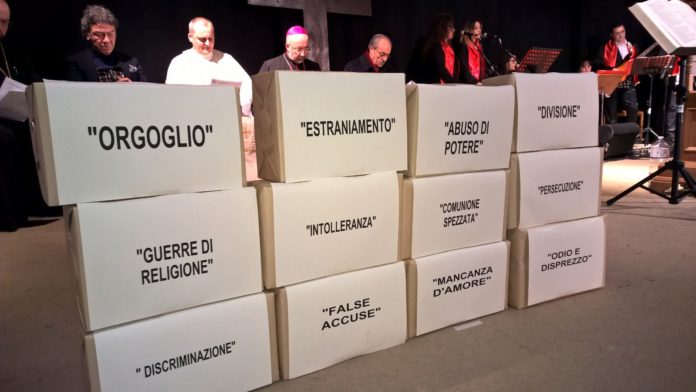 Rome (NEV), January 21, 2017 – In the small town of Tolentino, Central Italy, hit by severe earthquakes in August and October, this year’s Week of Prayer for Christian Unity (18th-25th January) has been a very special one. Despite the weather conditions with heavy snowfall, local Protestants, Catholics, Orthodox, and Pentecostals gathered on the evening of January 20th for an ecumenical vigil. Giovanni Arcidiacono, president of the Christian Evangelical Baptist Union in Italy (UCEBI), chaired the prayer organized by the local Baptist congregation in the Theatre of Tolentino, since the other worship places in town, so as the ones in nearby Macerata, and especially the Cathedral of San Giuliano, have been highly damaged.

Arcidiacono recalled the friendship between Jesus and his disciples (John 15: 13-15) underlining the way we tend to split public life from private life, “privatizing” the feeling of friendship: “By saying God’s joy of bringing the Gospel to the poor, Jesus breaks up the understanding of friendship as only an exclusive matter”. As to say: through God’s love we are friends, ecumenical friends. Paolo Matcovich, director of the Diocesan Bureau for ecumenism and interfaith dialogue, said: “Five hundred years after the Lutheran Reformation, we find it particularly significant that it is a mainline Protestant church to welcome and invite us to turn to the one and common Savior to renew mutual forgiveness and to build a future of unity in diversity”.

At the start of the event the representatives of the different communities laid on the stage several symbolic bricks, representing human errors, with which they built a wall; at the end of the meeting the wall was pulled down to build a cross instead.

Among the participants also the bishop of Macerata, Msgr. Nazzareno Marconi, Greetje van der Veer for the Waldensian Board, Marios Gosea for the Rumanian Catholic Church, Innocent E. Ayemere, Pentecostal pastor of the Living World Chapel, Giuseppe De Vito for the Adventist church, Andry Grygorash for the Orthodox Church of the Ecumenical Patriarchate of Constantinople.

Pastor Arcidiacono recalled the engagement of the Federation of Protestant Churches in Italy (FCEI) to support the population in the Region, in particular the municipalities of Arquata del Tronto and Tolentino, where different projects have already started.

A Call for Catholic Religion Teachers in 2021, 17 years after the first one