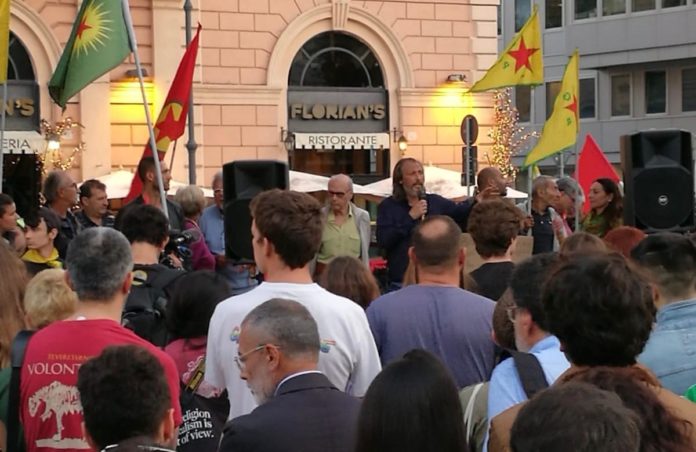 Rome (NEV), October 19, 2019  – The  FCEI Council adheres to this appeal:
“Blessed are the builders of peace (not of arms), because they will be called children of God”.
We are dismayed at the war initiative of the Turkish regime against the Kurdish people, already long vexed.
As a community of faith we commit ourselves to pray to resist against this new wave of violence that is coming to hit the heavily beaten northeastern Syria.
One wonders how many other refugees this aggression will generate from the Turkish regime.
There are many questions.
Some concern, for example, the supply of arms to Turkey by our Country. From “Rete Disarmo” (Disarmament Network) we know that in the last four years there have been authorizations for the sale of weapons up to  900 million euros and of these almost 500 million euros are the weapons delivered. Last year, permits were given for the sale to the Turkish army of aircraft, weapons, missiles and cannons for the amount of 360 million euros. So the weapons that shoot at the Kurds today are also, in considerable part, of Italian manufacture.
It makes no sense to invoke the end of the war action of the Erdogan regime if we do not immediately suspend the supply of any kind of war material.
It is also necessary that Europe does not give in to the threat of the Turkish regime to send us the 3.6 million Syrian refugees present on Turkish soil and for which the European Community has already paid Turkey 5.6 billion euros against the 6 which EU has undertaken to pay in the agreement signed in 2016.
How much is the life of a man or of a woman worth?
Switzerland estimated that the life of a Confederation citizen is worth 6.5 million francs (5.6 million euros). But obviously human life is much less worth in other countries and places.
How much is the life of a Yemeni child worth, and how much of a Kurdish child?
Obviously for someone nothing. Except for being used as a weapon of threat or blackmail.
But if you really want to know the price of a human being’s life, you have to ask a mother about it. She will know how to respond accurately and definitively.
To the most atrocious question that rises from the oppressed, that is the doubt that God himself has already abandoned them, so the prophet Isaiah responds (49: 14,15):
“Zion said, “The Lord has forsaken me,
the Lord has forgotten me”.
Can a mother forget the baby at her brest and have no compassion on the child she has born?
Though she may forget, I will not forget you!”
Our appeal is therefore a claim of justice, a protest against violence and a testimony of the maternal love of God towards everyone who suffers. We can only [stand in favor] of the Kurdish people, of the Yemenite people, of the Palestinians and of all those whose life is oppressed by tyrannical and unscrupulous regimes.
God does not abandon anyone and expects us to do the same”.