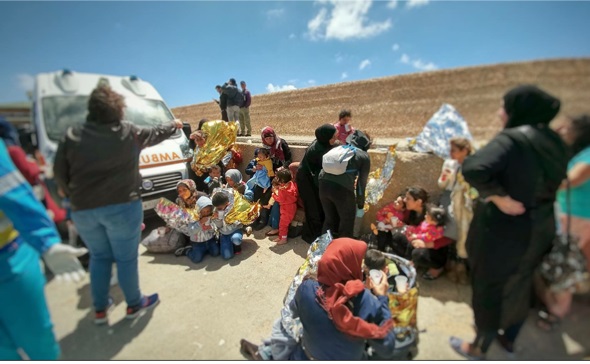 Lampedusa (NEV), May 16 – Since Friday 5th of May more than 6,500 people were rescued by the search and rescue missions in the Mediterranean Sea coordinated by the Italian Coast Guard. Since last January, over 43,000 people arrived in Italy by sea – according to the UNHCR spokesman Flavio Di Giacomo. In 2017 more that 1,150 people disappeared in the attempt of reaching Europe.

Since 2014, just a few months after the tragedy of October 3rd 2013, FCEI opened an Observatory on Mediterranean migrations, in Lampedusa: “Mediterranean Hope”. Alberto Mallardo and Francesco Piobbichi, FCEI operators present on the island in these days, explained to NEV Agency how the situation is changing after the initial of the agreement between the European Union and Turkey and the relative reduction of departures from the Aegean Sea. Libya actually remains the only starting point for Europe. People arrive now mainly from Gambia, Senegal and Bangladesh. Almost 4700 Bangladesh nationals arrived in Italy in 2017 and this, for example, should represent an alarm bell for the European Union about the situation in Libya. According to the witnesses of people arrived in Italy in these late days, in fact, it seems that with the worsening of the general conditions, people who have been working for years in the Persian Gulf or in Libya itself, sending money back to their country, are now trying to reach Europe through sea. But, in addition, some of them told FCEI’s operators that they have reached Tripoli directly by plane from Bangladesh, trying to reach Italy in a shorter time.

Francesco Piobbichi who is also in charge of the ‘humanitarian corridors’ from Lebanon – the ecumenical project which in one year brought to Italy in a safe and legal way 800 people, mainly Syrian – observed that “…after a long time, in May, several Syrian families arrived in Lampedusa again: almost 20 boys and girls with their parents loaded with luggage. It is not clear whether they lived in Libya or whether a new route has opened – in any case it makes quite an impression to see these people arriving tired and wet, with their children crying, when they could have arrived in completely different conditions with the humanitarian corridors”.