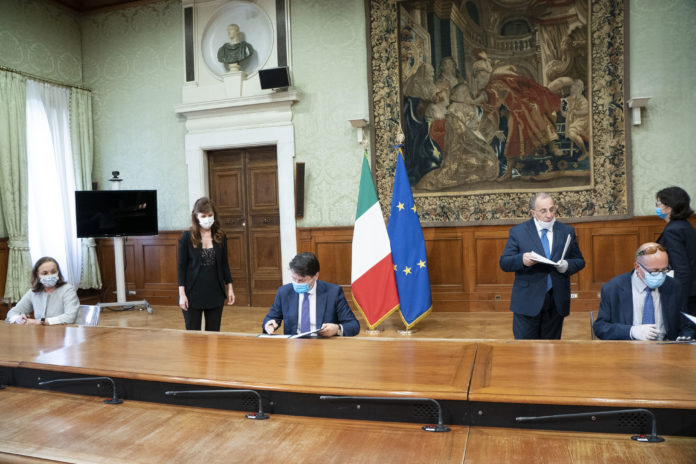 Rome (NEV), May 23,  2020 – The meeting that took place on  May 15, at Palazzo Chigi (seat of the Government), where the representatives of the large confessional areas present in Italy signed the Behavior Protocols,  was a decidedly unprecedented one, aimed at the progressive resumption of worship activities in compliance with the rules regarding the fight against the spread of the COVID-  19. Representatives of the Evangelical and Jewish communities, of the Islamic and Sikh ones, of the Hindu and Buddhist communities,  of the Jehovah’s Witnesses, the Baha’i and the Mormons met at Palazzo Chigi where, together with the Prime Minister Giuseppe Conte and the Minister of the Interior Luciana Lamorgese, signed their respective Protocols, each  adapted to the peculiarities of the various religious traditions regarding the performing of the rites.
The first signatory of the evangelical part was Pastor Luca Maria Negro, president of the Federation of Protestant Churches in Italy (FCEI) who also signed on behalf of the Union of the Waldensian and Methodist Churches, the Baptist Evangelical Christian Union of Italy (UCEBI), and the Lutheran Evangelical Church in Italy. (CELI). Although a member of the FCEI,  the Salvation Army signed separately. Other signatories of the evangelical side were the representatives of the Assemblies of God in Italy, of the Union of Adventist churches, of the Apostolic Church, of the Evangelical Council and of the Evangelical Alliance. Also present was Archbishop Ian Ernest, director of the Anglican Center of Rome.
“The meeting made the religious pluralism of today’s Italy plastically visible – commented President Negro – and showed the fruits of the collaboration between the State and the various religious confessions also on delicate matters such as that of the anti-pandemic measures to be adopted in the exercise of worship activities. I am also pleased to underline that FCEI has signed, thus launching an important signal of unity in relations with the Italian institutions”. The relations with the various confessions were interwoven by the Department for Civil Liberties and Immigration within which the Central Department for Cults Affairs operates.
“Thanks go to the Ministry of the Interior and to those who fixed these relations with competence and commitment – Negro continued – engaging in a serious dialogue with the representatives of the various confessions, welcoming the comments and proposals they made. As protestants, we appreciated, in particular, the uniformity of the criteria adopted for the various confessions and the attention to the service of their ministers to whom, exceptionally, has been recognized the possibility of  interregional travels, since they often operate in large diaspora. A good practice has been created. We hope that it will be adopted on other occasions as well”.