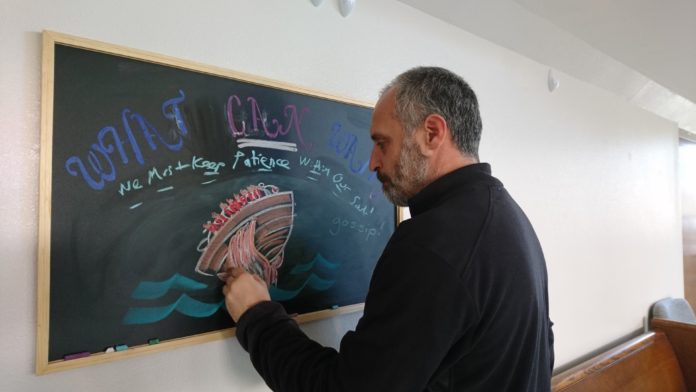 Rome (NEV) 24th January 2020 – Mediterranean Hope in the US, at the border with Mexico, for a “border to border” exchange of practice and experience.

Two staff members from the FCEI’s Refugee and Migrant programme, Fiona Kendall and Francesco Piobbichi, recently concluded a trip to Sahuarita, Arizona.  From 16th to 18th January, they were guests at two important events in the calendar of North American migration activists, namely, the Common Ground on the Border festival and the Border Issues Fair, now in its seventeenth year.

Both the events and the visit were organised by the UCC Church of the Good Shepherd which decided this year to invite Francesco, the social operator and author of “Drawings from the Border“, to give a keynote address, a central part of both events.

“It was a hugely enriching and moving experience,” explained Fiona, “a very important opportunity for exchange. Participants, numbering around 300 activists and church members from all over the US, listened to our testimony and were very moved by the stories associated with Francesco’s drawings.  Whilst there, Francesco and Fiona also took part in field trips organised by “border minister” Randy Mayer.

“We went to Nogales,” continued the FCEI’s European & Legal Affairs Advisor,”a town divided in two by the wall between the US and Mexico.  We crossed the check-point which separates the two sides. On the Mexican side of the wall there are crosses, graffiti and art installations to remind us of the migrants who have lost their lives there.  Such things are not permitted on the US side. There we visited a reception centre housing those waiting to cross – and those returned to await the outcome of their asylum applications.  We also spent time in the desert where local churches and activists leave water for migrants. During the Fair, we had the chance to hear from experts on topics relating to migration, such as Todd Miller, author of “Empire of Borders”, on the “business” of migration, human rights activists and experts from all over the US.  We also visited migrant memorials in the desert, which form part of a project called Donde mueren los suenos, (“Where Dreams Die”), by artist Alvaro Enciso, who has planted 900 crosses where human remains have been found.  However, many more have been found – an estimated minimum 3000 – men, women and children who haven’t made it across the desert, who haven’t survived their journey of hope”.

Sadly, they found much in common between that border and the tragedies in the Mediterranean.   “There are many parallels between our work and that of North American churches located on the border with Mexico,” confirmed Fiona.  The first element in common which made us think of Italy was the continuing attempt to criminalise humanitarian aid.  Next, continuing attempts to externalise borders, i.e. contracting out border control to third countries in an attempt to return migrants to countries of transit and of origin.  That’s certainly what US policy seems to have been about for some time.  From what we could see, the aim is to push back as many migrants as possible, to force them to stay in Mexico, or at the mercy of the desert”.